Santorini Travel Guide You Need At Every Step

The jewel of the Cyclades….the Volcanic Santorini has many villages and towns here but the cosmopolitan hubs of Fira, Oia, Monolithos, Finikia, Kamari, Perissa, Megalohiri and Perivolos are the ones which draw maximum number of tourists. Most of the homes on Santorini are white washed creating a spacious pristine illusion though in reality these are densely packed homes.

Santorini offers lunar landscapes, Caldera with its volcanic centre and lovely towns like Fira, Oia, Imerovgli, Firostefani, Pyrogos etc. The profusion of ancient churches, monasteries and very old castles only accentuate the unusual landscape that surrounds them….in Santorini the constructs are props and the landscape is the star.

Red beach with its ravishing ruby hued rocks and White beach with its spectacular white cliffs against the black sound are some of the most photographed places in the world. Vilchada beach with its bevy of luxury resorts and spas and Akrotiri with its historic ruins that revealed a carefully preserved town that was submerged by lava are star attractions of Santorini.

Revel in the terrace restaurants and watch the sunset from cruise ships that take you to the Volcano centre while you sip on the choicest Santorin wines. The ash and pumice laden soil of Santorin imparts a special mineral rich flavour to everything…wines, tomatoes, eggplant and even the Greek goat cheese here tastes different.

Go on a sumptuous wine tour that winds around Exogialos, Monolithos, Megalochori, Pyrgos and Caldera and learn the secret techniques that have made Santorin the most coveted wine hub. Explore the island on donkeys that manoeuvre the lunar landscape with dexterity or zap around on quad bikes….either way you will fall in love with the place.

Learn about all the features of lovely Santorini in our exhaustive guide. Here is a great article to explore Santorini: About Santorini Island and its tourism.

Also go through the articles below and get to know in details about each aspect of Santorini including its great attractions, tours, hotels, dining options, shopping, nightlife, transport and lot more. Oia… the city of famed sunsets and marvellous views is known for its restaurants and cafes that dot every road and alley. Though when tourists consider having a meal at Oia, they generally have a sunset meal with a view in mind but there are umpteen restaurants offering beautiful brunch spreads and traditional lunches that… Read the full article When visiting Santorini you need to keep in mind that this is an island that is shaped by the volcanic eruptions that happened aeons ago. The beaches are all ground down versions of the lava rocks that give the island its sublime yet wild beauty. Therefore the beaches are not typically ‘sand’ but powdered down… Read the full article About The Beach A great location for destination weddings and undoubtedly one of the best nightlife hubs in Santorini, Perivolos is a gleaming volcanic black beach. Its exact location is between Perissa beach and Agios Georgios beach. Perissa beach and Perivolos are almost interconnected but the atmosphere is very different on them. While Perissa is… Read the full article To go from Fira City to the Old Port or from the Old Port to Fira City; you will have 3 basic choices. The first choice is walking down / up 500 (or more) steps. The second choice is to ascend/ descend via a donkey/ mule ride… this is a long-running tradition in Santorini. The… Read the full article What To Expect Santorini qualifies as one of the best hiking destinations in the world and many seasoned hikers claim that the Fira to Oia hike is the best hike they have ever taken in any corner of the world. The hike proceeds along the edge of the caldera and offers marvellous views of the… Read the full article What to Expect The Red Beach in Santorini is one of the most unusual looking beaches you are ever going to see. Also called Kokkini Paralia, the Red beach is filled with ground down pebbles and granules of the same iron-rich lava rocks that frame it. Most visitors who come here brave the ‘unsafe’ signs… Read the full article Perissa beach lies at the foot of the Mesa Vuono Mountain and its beautiful black expanse can be seen by tourists who come to explore Ancient Thera. The black lava of Perissa has attracted hordes of photographers and geologists who were fascinated by this sparkling black sand beach. The dark sand at the pit of… Read the full article What to expect Greek Wines are now well perched on any Oenologist’s list along with French and Italian wines. Santorini wine varietals have a special place in the world of Greek wines because of that distinctive volcano flavour. This is a gift of the Santorini Volcano eruptions that gave the island that special volcanic ash… Read the full article 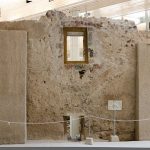 Akrotiri Archaeological Site is an ancient Alice in wonderland kind of experience!! Pay the entry fee and step in only to be amazed at the scale and structure of this hugely developed city that was submerged under the ashes. There is a maze of roads and pathways that go through the site and you can… Read the full article Much of Akrotiri’s excavation finds are housed in the museum of Thera that aims to give visitors a comprehensive idea of the ancient Akrotiri settlement at its height of popularity. There are detailed plaster casts of furniture household equipment in amazing variety and a range of bronze weapons, tools and bowls. While these pay tribute… Read the full article