Netherlands Travel Guide You Need At Every Step

The country with a strong survival instinct…the one which made it right to the top of every travellers list despite being below sea level is also mistakenly referred to as Holland by almost everyone. More than 2500 square miles of the land which now belongs to Netherlands was once claimed from the Sea and Lakes by using massive horse power and gigantic windmills; creating one of the biggest tributes to the strength and fortitude of man.

Netherlands is now known for its bewitching canals, profusion of windmills, bright fields of tulips and amazing cycling routes. Amsterdam… the capital city is best explored by cycle rides or boat rides through its canals while you stare at the architecturally marvellous buildings.

Rotterdam brims over with restaurants, hotels and shopping hubs. However the real beauty of Netherlands is in its greens… a trip to the Naardemeer Nature Reserve of Amsterdam or the Veluwe National Park will open up your eyes to its lovely flora and fauna.

A visit to the Kinderdijk will inspire you as you understand how the Dutch used windmills ingeniously to empty water out of massive lakes while Keukenhof with its displays of more than 700 variants of tulips will stun you. Culturally this is a free secular land, one of the first countries to validate same sex marriages and its streets and cafes are filled with tall young people who aren’t afraid to voice opinions.

You will find Netherlands an interesting experience and your trip will have more value if you know about its lesser known facets and attractions as well. Know all about Netherlands in this detailed guide.

Here is a great place to start: About Netherlands Tourism.

Alternatively go through the list of articles below and explore deeper into various aspects f the country including its great attractions, hotels & restaurants, shopping, nightlife, weather, transports and lot more. 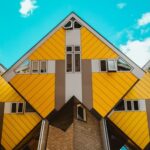 Rotterdam’s Cube Houses have always been the city’s most prominent attraction. The 38 regular Cube houses and two ‘Super Cubes’ have been conceptualized by Piet Blom, a Dutch architect. The residential units are cubes in the truest sense… they tilt over and as you pass by the road below, you might be tempted to watch… Read the full article Getting Into The City From the airport Rotterdam The Hague Airport (known as RTM Airport) is one of Netherland’s busiest airports and it not only serves Rotterdam but also Hague and other ancillary regions. The Airport is strategically placed between the two cities; Rotterdam and Hague. British Airways operates regular flights from London-City airport here… Read the full article The train takes an hour and ten minutes to reach Rotterdam from Amsterdam Central.  Rotterdam is located in the southern part of the Netherlands and is the second-largest city in Dutch land. This place is also known as the ‘Gateway of Europe’ because of its location by the North Sea. Situated at the delta of… Read the full article Netherlands is commonly referred as Holland. This is the country of 17th century master painters Rembrandt van Rijn and Johannes Vermeer. Another maestro from last century is Vincent Van Gogh. Netherlands is located in the North Western part of Europe. The word Netherlands means low lands or low lying country. This is quite true for this… Read the full article

Climate The weather condition of the Netherlands is controlled mainly by the maritime climate. Due to this Netherlands experiences cool winters and warmer summers with high humidity. As per its topography, the entire country sees a somewhat moderate climate with very little difference from one place to another. The main difference is between the coastline… Read the full article At last I landed at the Schiphol airport on a cool evening. The airport is 22 kilometres southwest of the capital city Amsterdam. Having landed, I took a train towards Amsterdam’s central station, a grandiose building operating since 1889. My journey in Dutch land begins… Welcome to the land of bicycles. Why? I shall come… Read the full article Getting to the City Centre Schiphol international airport, Amsterdam is well connected with rest of the world. This busy airport has direct flight connections with most of the countries of Africa, America, Latin America, Europe and Asia. The flight time from Heathrow (London) to Schiphol is around one and half hours over a distance of… Read the full article

There are several wonderful places around Amsterdam which are excellent for half or full day trips. I recommend you to take these trips by public transport especially by train since it’s convenient, less time taking and budget friendly. For some destinations, cycling is also a great option. Zaanse Schans How was Holland during 17th and… Read the full article Kids are often ignored when a city designs its theme around tourist attractions & activities. And this can apparently seem to be true in Amsterdam which has a lot of adult activities like Red light area, boozing in pubs & bars and taking soft drugs. But fortunately there are plenty of scopes for kids as… Read the full article